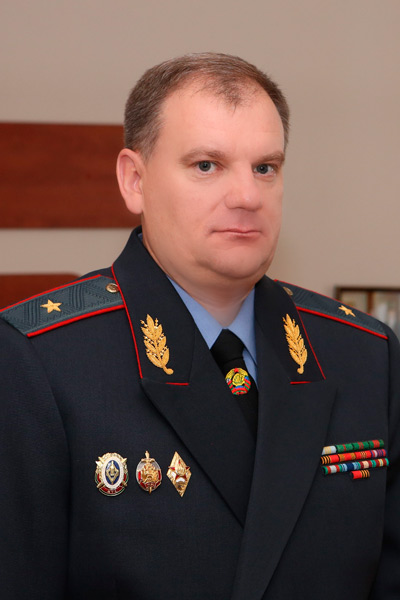 The head of the Academy of the MIA

Major-General of the militia

In 1989–1993 Sergey Doroshko studied at the Saratov High Krasnoznamennoe Military School of the Interior Troops of the Russian Interior Ministry named after F. E. Dzerzhinsky. Then commanded a cadet platoon there. Since May 1994, served in the internal troops of the Ministry of Internal Affairs of Belarus. In the military unit 6713 (Mogilyov) he worked his way up from the deputy company commander to the deputy commander of the unit – chief of staff. Also, Sergey Doroshko served in various posts in military unit 7404 (Baranavichy), and then was a commander there from 2003 to 2006.

In 2000, he graduated from the command-staff faculty, and in 2010-2012 studied at the faculty of the General Staff of the Military Academy of Belarus.

In 2006-2008, he was deputy head of the combat service department of the General Directorate of Personnel of the Ministry of Internal Affairs. Then served in the positions of deputy commander for combat training and first deputy commander – chief of staff of military unit 3403 (Minsk).

In 2012, he headed the Department for the enforcement of sentences of the Ministry of Internal Affairs. From November 2017, he was head of the Internal Affairs Directorate of the Minsk City Executive Committee.

He was awarded the Order "For Service to the Motherland" of the III class, the medal "For Irreproachable Services " of all classes.

The first deputy head of the Academy of the MIA

Colonel of militia
Candidate of Juridical Science, Associate Professor
Honorable officer of the MIA of the Republic of Belarus

Alexey Bashan is the deputy chairman of the teaching and methodical association of high educational institutions of the Republic of Belarus for law enforcement education, a member of the scientific and methodical council for the group of specialties "Law" of the humanitarian education association, a chairman of the scientific and methodical council of the Academy of the MIA. Since 2006, he is a member of the scientific council of the Scientific and Practical Center for strengthening the law and order of the General Prosecutor’s Office. Since 2014 Alexey participates in the work of the council of the special fund of the President of the Republic of Belarus for the social support of gifted students. In 2015, he was included in the Expert Council №8 of the High Attestation Commission of the Republic of Belarus in the legal sciences.

He published more than 70 scientific and methodical works, including the monograph "Corruption: Theory and Practice of Counteraction", two manuals "Detective activity of Internal Affairs Bodies" and "Anti-Corruption", two practical manuals "Prevention, detection and investigation of crimes in the sphere of economy and banking" and "Peculiarities of offenses detection and crime investigation in the field of intellectual property", a course of lectures "Economic crimes investigation", guidelines on the identification and documentation of bribery.

Alexey Bashan awarded with the 2nd, 3rd classes medal for irreproachable service, jubilee and commemorative medals. Moreover he has other merit awards. 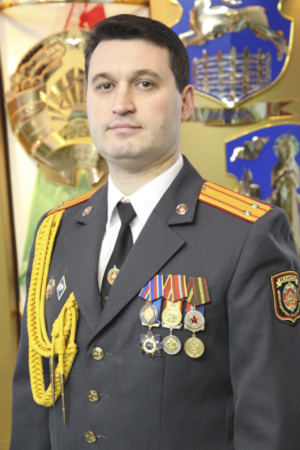 In 2005, he graduated from the Belarusian State University with a degree in Economic Law.

He was awarded with the anniversary and commemorative medals and other rewards.

Deputy Head of the Academy of the MIA 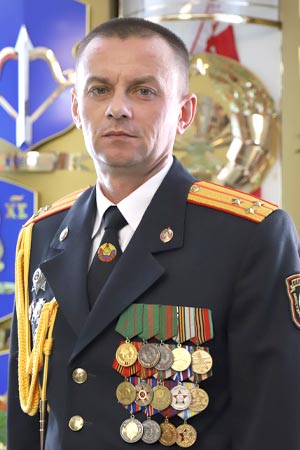 Deputy Head of the Academy of the MIA

In 1995 he graduated from the Perm higher military command-logistics school of the internal troops of the MIA of Russia, in 2009, the Military Academy of the Republic of Belarus and in the future, master (2020).

He began his career as a cadet of the higher military school in August 1991. From 1995 to 2007, he served in the military unit 5448 of the internal troops of the Ministry of Internal Affairs of the Republic of Belarus in various positions from the commander of a rifle platoon to the deputy chief of staff – the head of the operational department of the military unit. After training at the command and staff course at the Military Academy, he served in command positions in the military unit 5530 MIA (2009 – 2010), the military unit 5448 MIA (2010 – 2015), in the 1st militia unit. MIA (2015 – 2018). He studied at the Military Academy at the Faculty of the General Staff of the Armed Forces (2018-2020). Appointed to the position of Deputy Head of the Academy of the Ministry of Internal Affairs on August 27, 2020.

He was awarded the Order "For Service to the Motherland" of the III degree, medals "For Impeccable Service" of all degrees, and was awarded other awards and incentives.