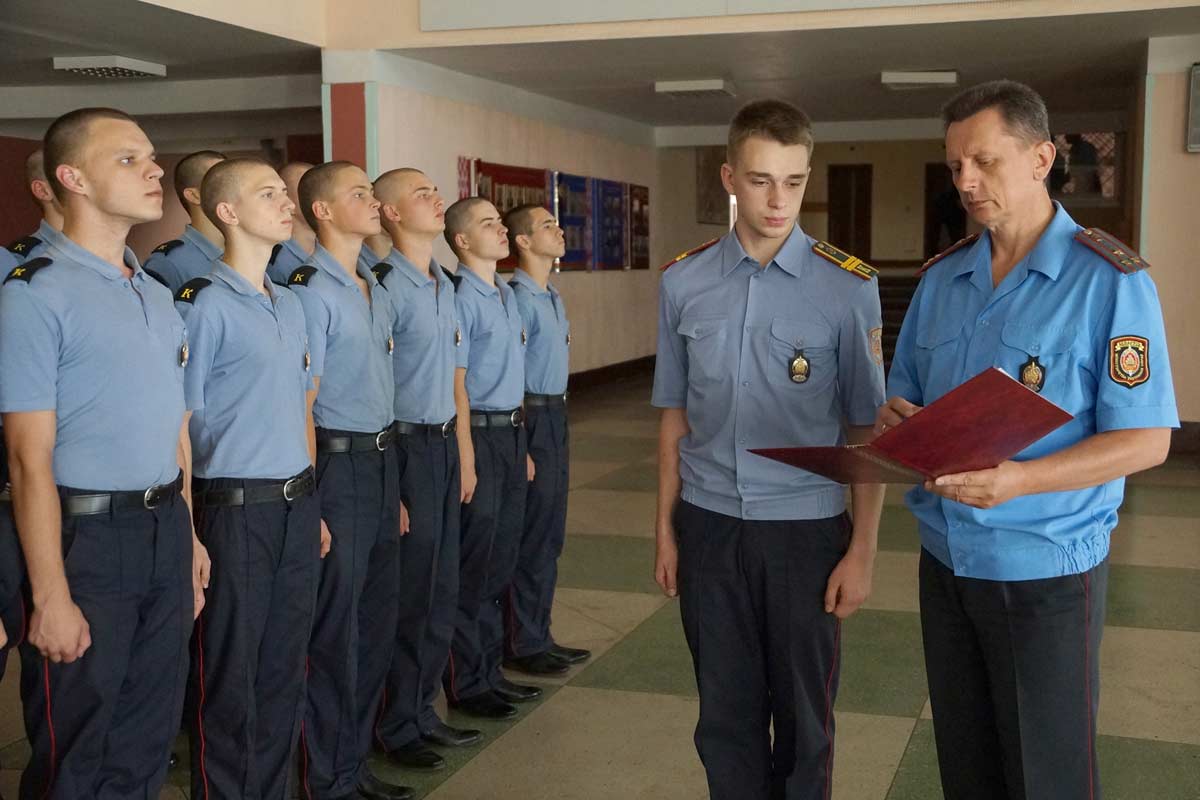 The newspaper of the MIA "Na Strage" acquainted readers with first-year students of a militia educational establishment. What are the achievements and plans of the guys - more in our publication.

Already the first days of the recruits' stay in the Academy of the MIA have shown: the critics from the mouth of the education establishment's head, major-general of militia Vladimir Bachila, was heard and the work on the shortcomings was carried out.

Head of the Academy of the MIA repeatedly stated that those who enter our educational establishment pay little attention to their physical perfection, and this negatively affects their further training and in some cases may even serve as a reason for deduction.

The entrance control, made by the representatives of the chair of professionally-applied physical training, showed that the current cadets are stronger than last year's. By the way, a similar conclusion was made by medical workers who conducted professional selection.

As a child cadet Danila Radyuk, when visiting the amusement park, was practically not interested in attractions, but he was a regular a shooting range. And even then it was noticeably distinguished among others by its results. However, in order to get into the corresponding section, I had to wait few years for performance, since the younger ones were not recorded there. 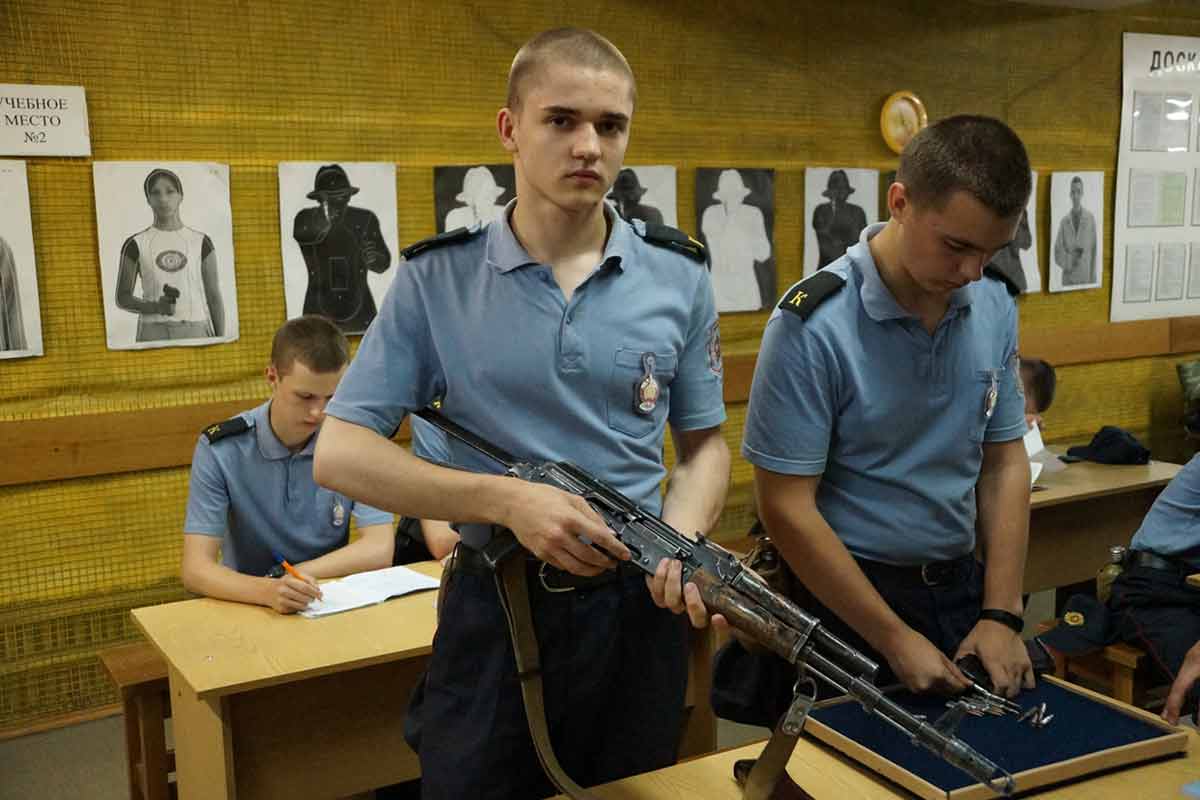 On the photo: cadet Danila Radyuk

When adults ceased to accompany him, the guy managed a month, under various pretexts, not to appear in the shooting range. But at home on the couch more than a month did not sit - that's how much time it took to understand how much the guy was attached to the soul of the shooting.

At the Minsk city competitions D. Radyuk executed the standard of the candidate for the master of sports, "having beaten out" from the fighting gun 368 points from 400 possible. Later, a similar result was shown at the championship of Belarus.

The team of the Minsk regional cadet school, in which Marina Kosach from Luban was also, won in 2016 and 2017 in the Cup of Belarus on the U-17 korfball, and the girl herself was recognized as the best player.

The freshman, by the way, is friends not only with sports. She sings well, confers, and this spring not only won the Republican juridical Olympiad "Femida" together with her school, but also received the title of the best novelist. 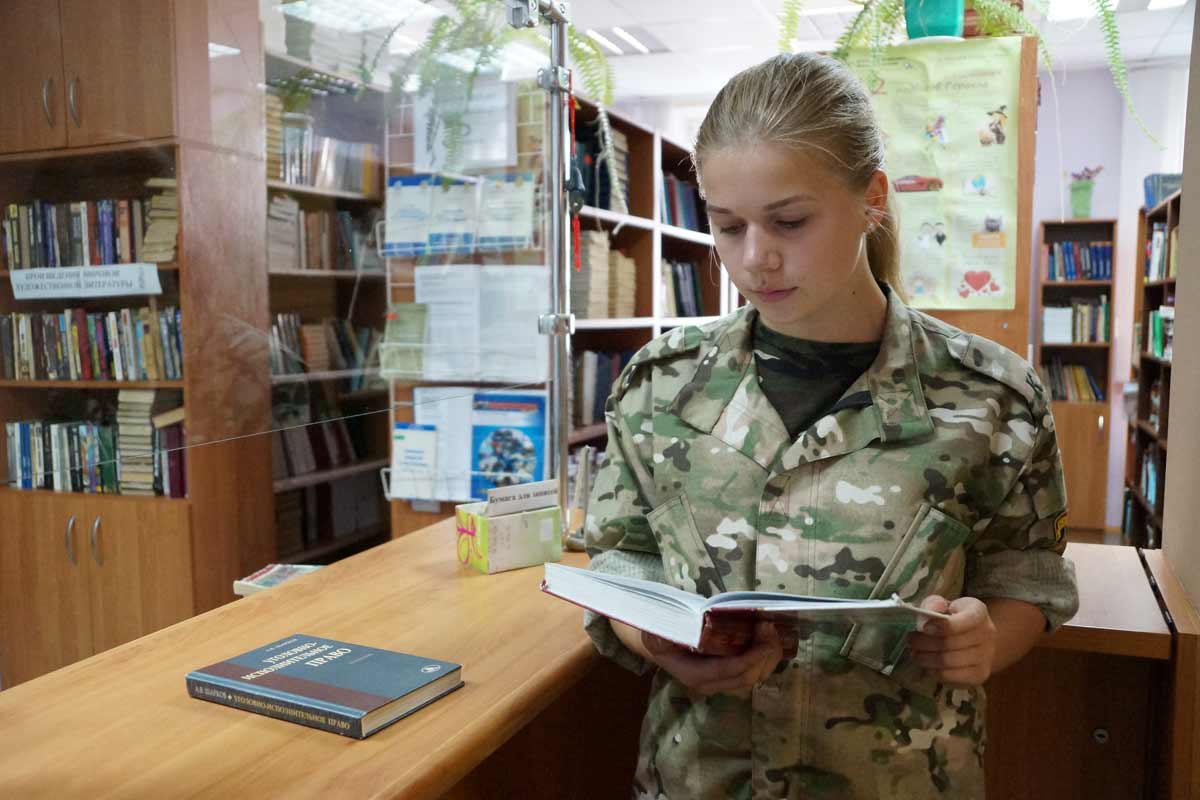 When Roman Ryabov is asked why he wanted to become a militiaman, he refers to a phrase from the well-known film "Officers": "There is such a profession - to protect the Homeland", and adds: "Both from external enemies and from internal enemies."

Vyacheslav Melnichenko from Borisov wears shoulder straps almost the whole family. Grandfather for his mother Vladimir Leontiev for many years gave the Armed Forces, retired in the rank of lieutenant colonel. 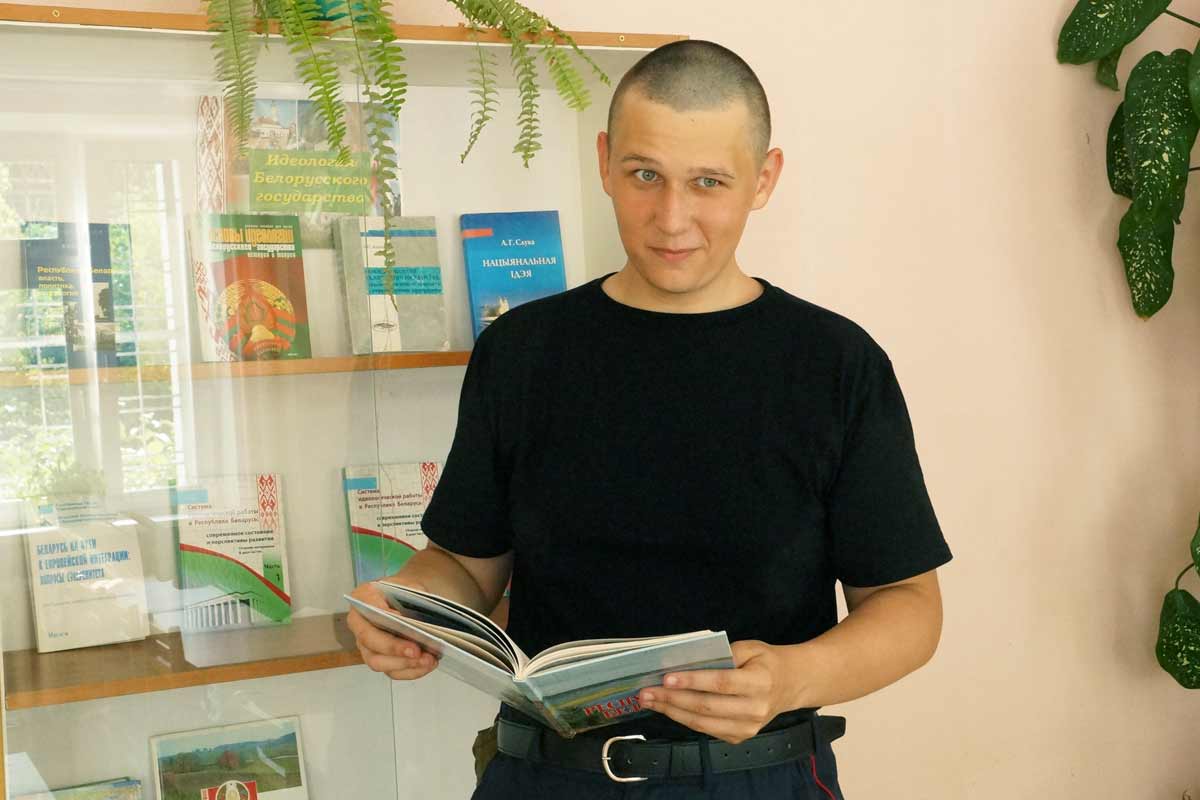 On the photo: cadet Vyacheslav Melnichenko

About ten percent of the cadets of each group are employees of internal affairs agencies who served in the Armed Forces, graduates of the Specialized Lyceum of the MIA, Minsk Suvorov Military and Cadet Schools, who already lived in order and, as the first assistants to course officers, lead yesterday's schoolchildren. 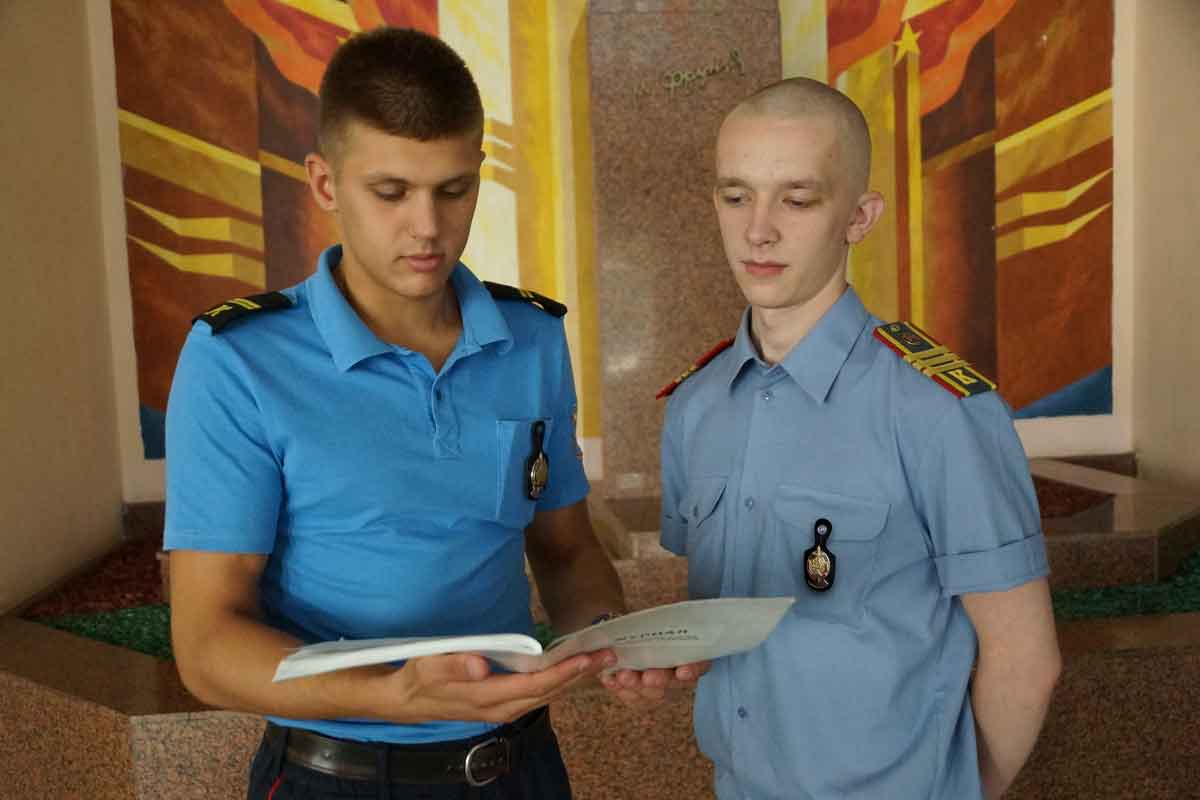 Among the current cadets there are many who before reaching the Academy of the MIA managed to take certain heights. Thus, Julia Khomyakova from the Vitebsk Cadet School from the 10th grade is engaged in scientific activities. The girl became a laureate of the special fund of the President of the Republic of Belarus for the social support of gifted students. This year, Julia won a diploma of the I degree at the competition of scientific research, which was held in St. Petersburg. 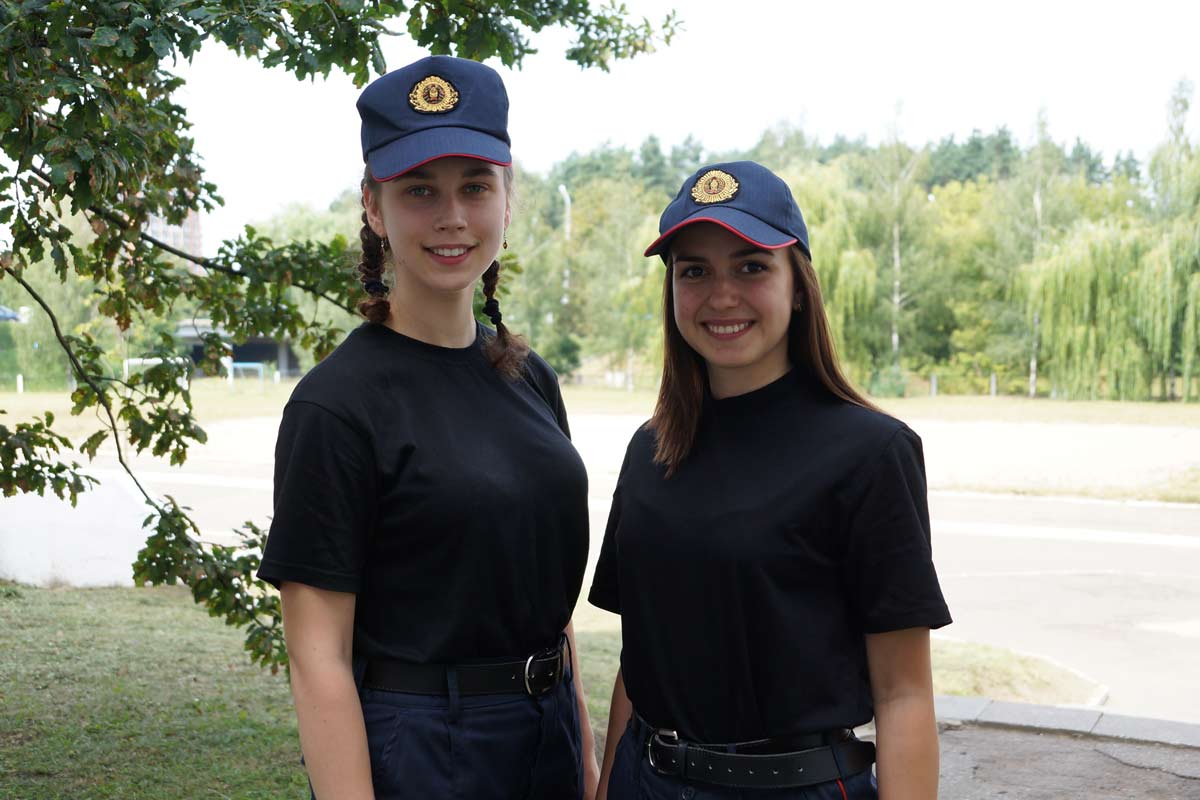 The gold medalist Xenia Chirkun with her work "Symbols and Heraldry of Cadet Schools" last year won the first degree diploma of the First open internally-extramural scientific-practical conference with international participation "For the benefit of the Homeland and the person!", which is held by the capital's school No. 68 jointly with the multi-profile Cadet Corps named after the Hero of the Soviet Union, USSR pilot-cosmonaut L.S. Demin (Tambov). In the school, the girl took a great interest in orienteering and won regional competitions together with her team. 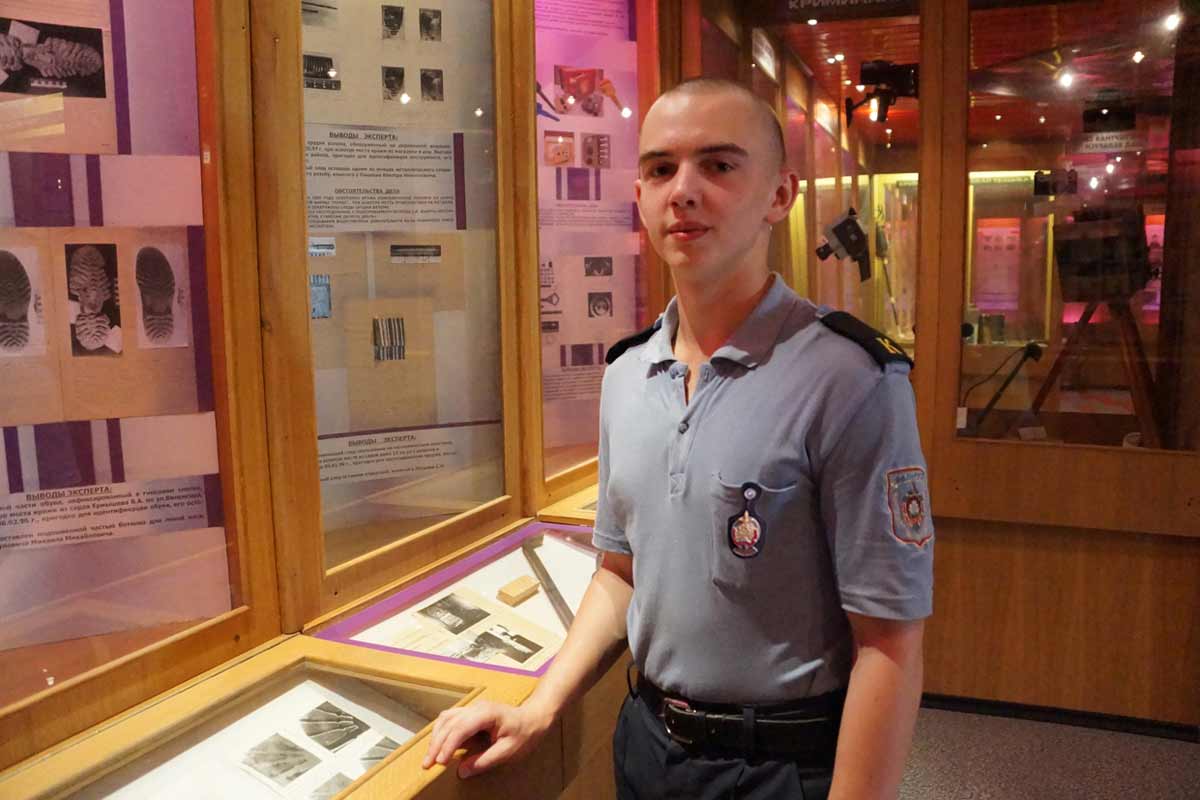 On the photo: cadet Serafim Sen

When Serafim Sen lived in the Pruzhany district, he was engaged in the hockey team of the city, with which he became a bronze medalist and twice silver winner of the tournament "Golden Puck". And on training I went on weekends from Minsk. To receive a specialty "Psychology of official activity" the guy will be in Moscow.

To recruits it was easier to get used to the new realities of life, the leadership of the Academy held a number of educational and methodological fees with them the day before.

- This year the recruits were probably received by our most experienced staff, conducted more than one training camp and made more than one release, - concluded Valery Zhvansky.

Based on the materials of Olga Kulikova, the newspaper "Na Strage".
Photo by Anastasia Voinova

Interview for the Day of Belarusian science

A large interview with the deputy head of the Academy of the Ministry of Internal Affairs, Valery Rodevich, was published in the newspaper "The Guard". This is a special issue for the Day of Belarusia...
The Way from the Lyceum Student to the Cadet of the Academy...

The President of Belarus Alexander Lukashenko awarded diplomas of the doctor of science and certificates of professor to scientists of the country. Anatoly Savenok, representative of the Academy of th...
Nigerian Police Are Interested in Cooperation

The delegation of Nigeria met with the leadership of the Academy of the Ministry of Internal Affairs of Belarus to discuss the prospects of cooperation in the educational sphere.
Cadet Teams Are Preparing for the olympiad

The intellectual and creative olympiad “Patriot” will gather cadet teams from all over the country at the Academy of the Ministry of Internal Affairs on February 28.
The Academy will release 91 editions in the year 2020

This year, the Academy of the Ministry of Internal Affairs plans to publish 10 monographs, 45 study guides, as well as other literature. Books will be recognizable thanks to a specific design.
Meeting Participants of the Coordinating Council Talked about the Results and Work...

The Academy of the Ministry of Internal Affairs will continue to participate in the project of international technical assistance in the field of combating gender-based violence and domestic violence....
Scientist from the Academy was awarded Presidential grant

The Council of the President’s Special Fund for Social Support of talented pupils and students encouraged the youth of the Academy of the Ministry of Internal Affairs.
Ample Opportunities - for Psychological Assistance

A two-day training in the Academy of the Ministry of Internal Affairs brought together psychologists to discuss pressing issues of assisting migrants and strengthening professional skills.
International Conference Held at China University of Police

A delegation of the Academy of the Ministry of the Internal Affairs took part in an international conference held at the China University of Criminal Police in Shenyang.
World Championship bronze medalist

The world sambo championship was held in the South Korean city of Cheongju. A professor from the Academy of the Ministry of Internal Affairs of Belarus is among the winners.