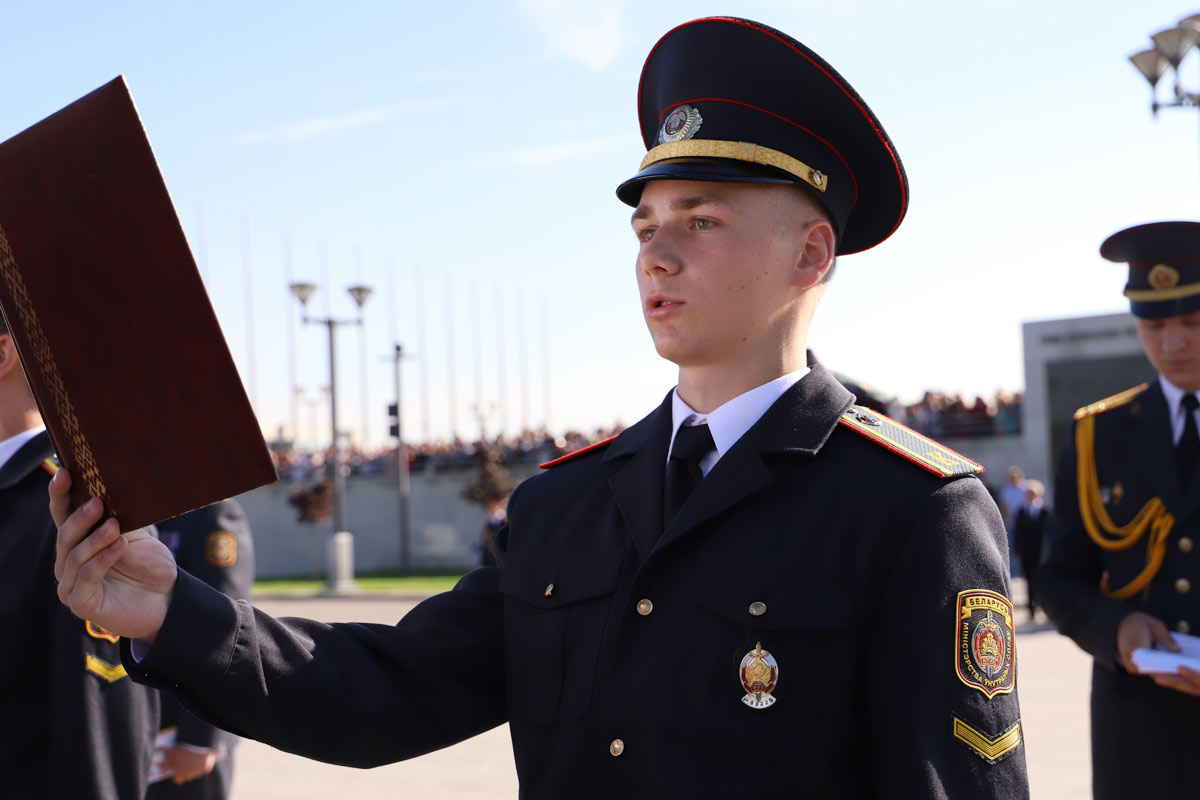 The freshmen spoke the main words in front of their comrades and senior officers. The solemn oath ritual took place on the State Flag Square in Minsk.

On this day, young people made an important step on their professional path. The leadership of the Ministry of Internal Affairs, representatives of government agencies, and the teaching staff congratulated the future officers.

“Today 437 cadets have taken an oath of allegiance to the people, the state and the constitutional order,” said the Minister of Internal Affairs Yuri Karaev. “The life of the people and the existence of the state are interconnected. These guys did not just come to learn a profession. They deliberately came to defend the state. This call comes on very difficult days for the country.”

The academic year for the new recruits began earlier than for the majority of Belarusian students. Having entered the police university, yesterday’s applicants went to the training camp. For a month, they lived and studied the basics of the profession within the walls of the Academy of the Ministry of Internal Affairs.

This year, the alma mater traditionally recruited applicants to three cadet faculties: militia, investigators and corrections. Future officers-lawyers are trained in the specialties of Jurisprudence, Economic Law, Forensic Examination. In four years, young law enforcement officers will continue to serve in the departments of the Ministry of Internal Affairs, the Investigative Committee, the State Committee for Forensic Expertise, the Department of Financial Investigations of the State Control Committee, the State Border Committee, and the Ministry of Defense.

“I didn’t expect it to be so interesting at the academy,” said Maxim Ignatovich, a freshman of the Faculty of Investigators, sharing his impressions. “Today I am overwhelmed with bright and extremely positive emotions. We carefully prepared for this day at the training camp. For me it was not a very difficult period, although many things were unusual. I learned discipline, to live according to a routine, found myself in a friendly team and I am very glad to communicate with cadets and instructors.”

Maxim’s parents came from the town of Tolochin, Vitebsk region. Mom, Lyudmila Leonidovna, admitted that it was not immediately possible to notice a familiar face in the ranks of the first-class cadets.

“The guys are so beautiful today! Stately, in uniform, in cadets’ shoulder straps. We looked at our son, and every movement echoed in our hearts. We feel pride in him and see how he has matured in a month, even his speech has changed, and when he talks about the academy, we understand that he really likes it here, this is the main thing,” said the cadet’s mother. “The son chose a profession himself, it took him a long time to get there, prepared for admission. We supported him, although we understood that we would miss him a lot. However, we are sure that our son is under supervision, under the  state care, he is protected from all sides.”

“I am very glad that today we did our best, we marched smoothly, our parents looked at us with admiration,” Ilya Svirepa, Maxim’s classmate, shared his impressions. “I chose a profession two years ago. I was interested in the work of an investigator, and went in for sports. At the training camp, it was not easy at first, but gradually I got used to a new way of life and discipline. Studying fascinated me, and I hope that later it will be interesting too. I am glad that we all have become friends. I am sure that we will carry this friendship throughout our lives.”

“We are very proud of our son and his choice of profession,” said Mikhail Mikhailovich, Ilya’s father. “We have come from Slutsk with the whole big family today. We visited our son two weeks ago at a first-year sports festival, saw that he became more self-disciplined, and noticed that he matured, changed for the better.”

Today’s holiday brought so many guests together. Relatives and friends of the freshmen came from all over Belarus. All of them worried no less than the cadets and watched with pride how the grown-up boys and girls marched solemnly, and then warmly congratulated and hugged them, took memorable photos, talked with the officers and teachers of the university.
The freshmen will spend two days with their families, and on Monday they will begin their studies at their faculties.