According to the results of the XXIV Republican competition of students’ scientific works, 10 representatives of the Academy of the MIA won. Two cadets were awarded the title of laureates.

Among the laureates of the competition there are representatives of the Academy of the MIA: a graduate of the magistracy Anna Matylitskaya and a graduate of the faculty of militia Sergei Petlitsky (on the first photo). Anna won due to her scientific work "Protection of trade secrets and its characteristics." Sergei successfully implemented research on the topic "Legal basis and features of protecting individuals who provide assistance on a confidential basis, involved in criminal proceedings and investigative activities." By the way, our graduate has already won in the XXIII Republican competition and has received the prize of the special fund of the President of the Republic of Belarus for the social support of gifted pupils and students.

The authors of the first category works are such graduates of the Academy as Sergei Gaikovich, Alexander Ermolaev, Mikhail Kolupanovich, Artem Mikheenko, Vladimir Moskalyuk, Nikita Samusev, Alexander Teslenok, and a cadet of the faculty of militia Nadezhda Kasperovich.

The topics of the works are diverse. For example, studies have been carried out in the field of the functioning of the correctional system, in the field of investigative activity and training of personnel for law enforcement agencies. Thus, graduates of the magistracy have successfully summed up their researches on the topics "Legal and organizational aspects of educational work in compulsory rehabilitation centres" (Sergei Gaykovich) and "Administrative and organizational aspects of professional education of employees of law enforcement agencies" (Alexander Ermolaev). Militia captain Sergei Gaykovich, who graduated from the faculty of corrections in 2011, today he works as a teacher of the chair of correctional law at the Academy of the MIA.

Graduates of the faculty of militia prepared such works as "Planning of investigative activities for operating records, instituted in the departments for combating economic crimes in order to document trade crimes" (Mikhail Kolupanovich), "Activity of the subjects of investigation activities for suppression of illegal migration related crimes" (Alexander Teslenok - the winner of the prize of the special fund of the President for winning in the XXIII Republican competition). Vladimir Moskalyuk studied the peculiarities of investigative activities.

The graduate of the faculty of investigators Artem Mikheenko covered the topic "Types of accomplices to a crime: problems of theory and practice". Nikita Samusev (the same faculty) became the author of two works, which was marked with the first category diplomas: "Combating illegal drug trafficking in the Republic of Belarus" and "Administrative and organizational bases of community policing strategies". 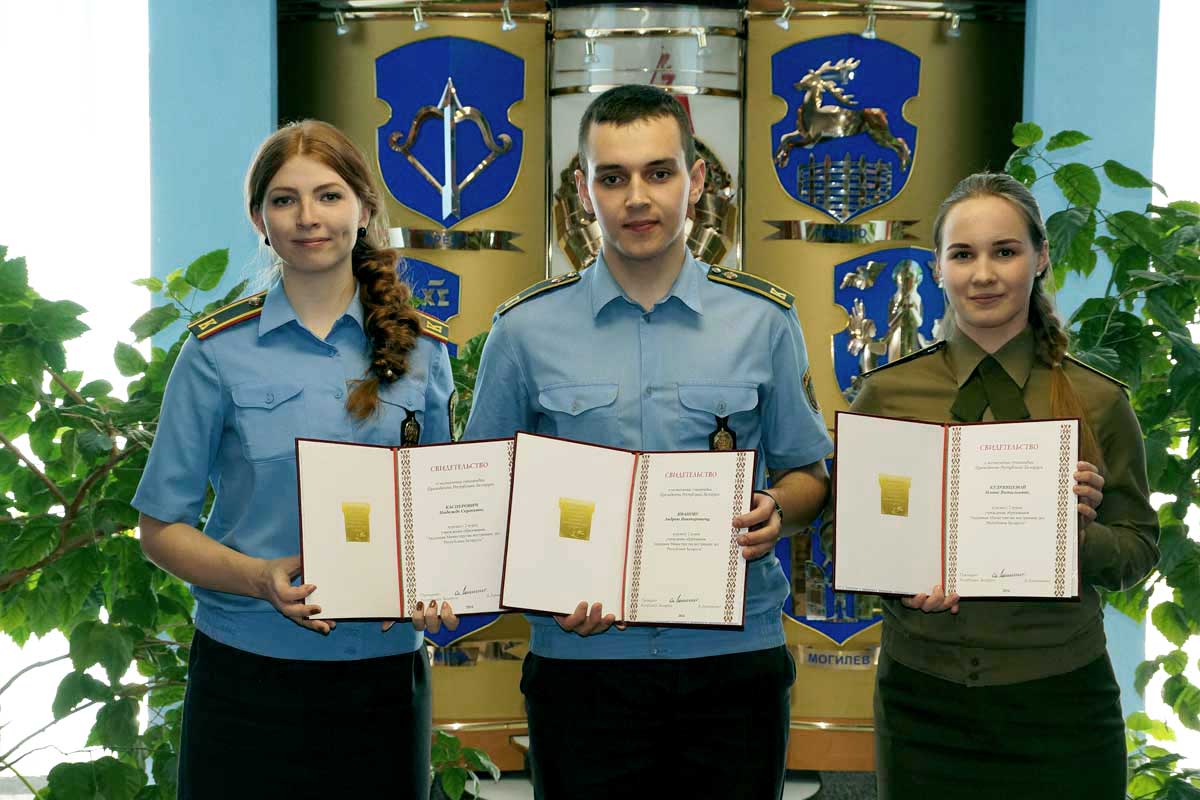 The President’s scholarship holder Nadezhda Kasperovich (on the second photo to the left) studies at the 4th “B” grade of the faculty of militia with a specializing in administrative activities, major in law. This spring she started her pre-diploma practice at the place of future service - in Postavy District Department of Vitebsk Oblast Executive Committee. The cadet's research on the topic "Theoretical and practical aspects of the implementation of the principle of legality in the activities of law enforcement agencies" was highly appreciated at the XXIV Republican competition.

Press Office of the Academy