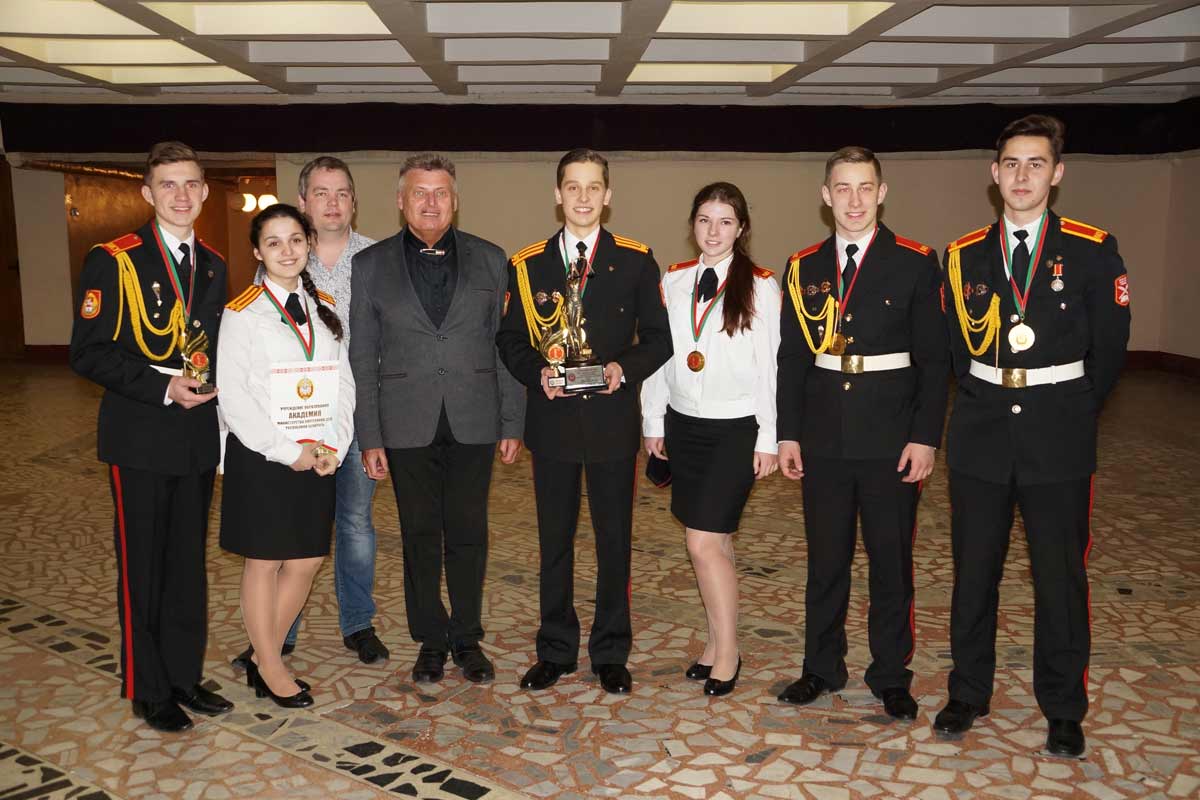 In the final of the Republican Olympiad "Femida", perhaps, there was one intrigue - how many points the Vitebsk cadets will outstrip the nearest rivals.

This time, the authorities' crushers at all last starts (the Grand Prix of the festival of the patriotic song of the "Red Carnation" of 2015 and 2016, the main prizes of "Femida-2015" and the republican cadet intellectual-creative Olympiad "Patriot-2016" left the city on the Dvina) did not leave any chance for the contestants, having retreated to the second place in only one contest, and twice having scored the maximum points.

Vitebsk won the leadership after the presentation of the team. They, without recourse to some complicated scenery and costumes, explained reasonably why they want to fight economic crimes, work as experts, serve in the OMON and demonstrated how they are going to do it. The duet of the triumphs of the last "Red carnation" Adrian Vysotsky (grand prix) and Nikita Sokha (second place) became the decoration of the room.

The initiative of the whole squad was supported by its captain Nikita Sokha. Let later the head of the team, the teacher of jurisprudence Alexander Grigoriev say that a little excitement prevented the guy from showing the maximum result, but no one answered seven of ten possible questions for more questions than he did. 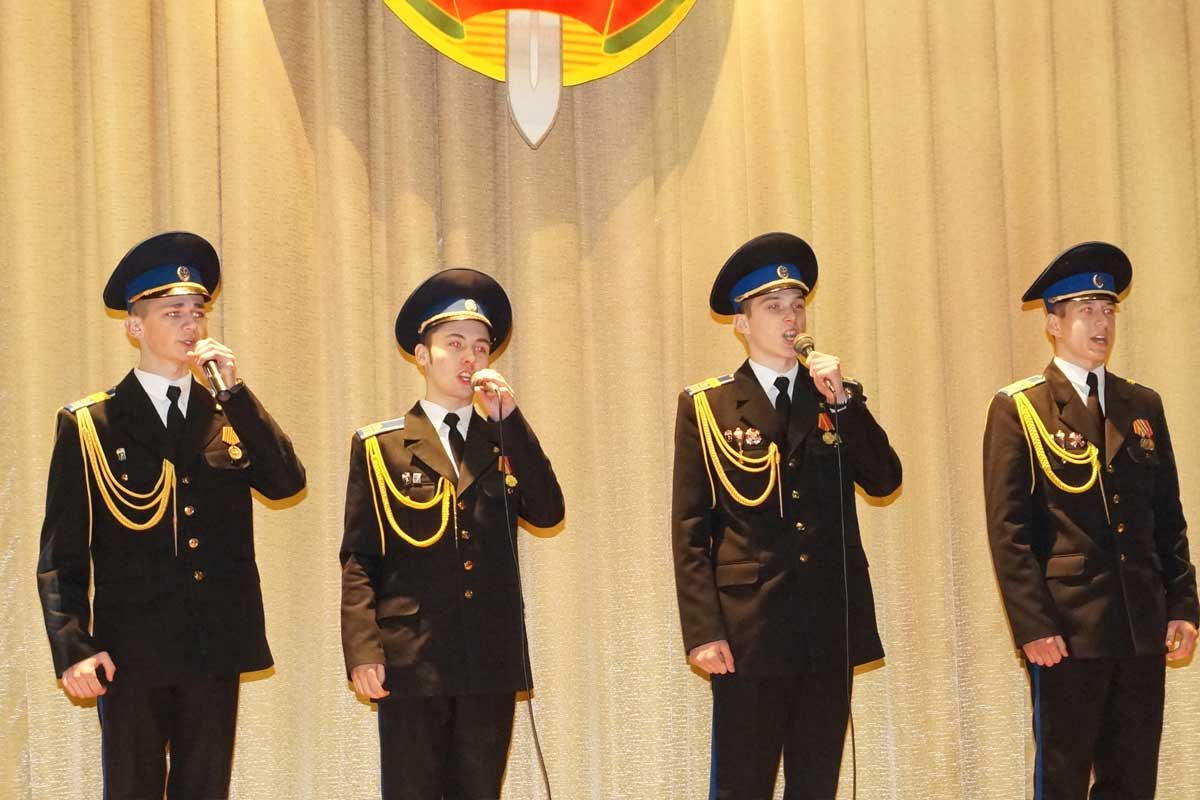 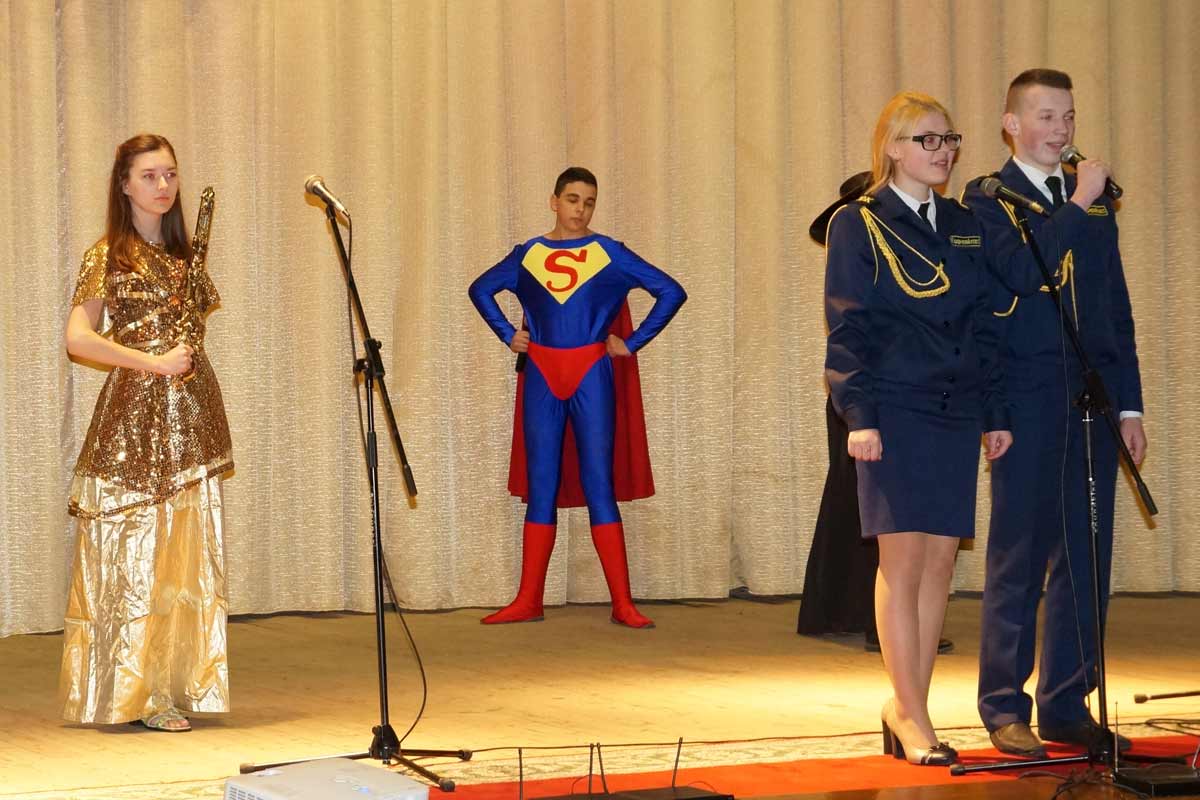 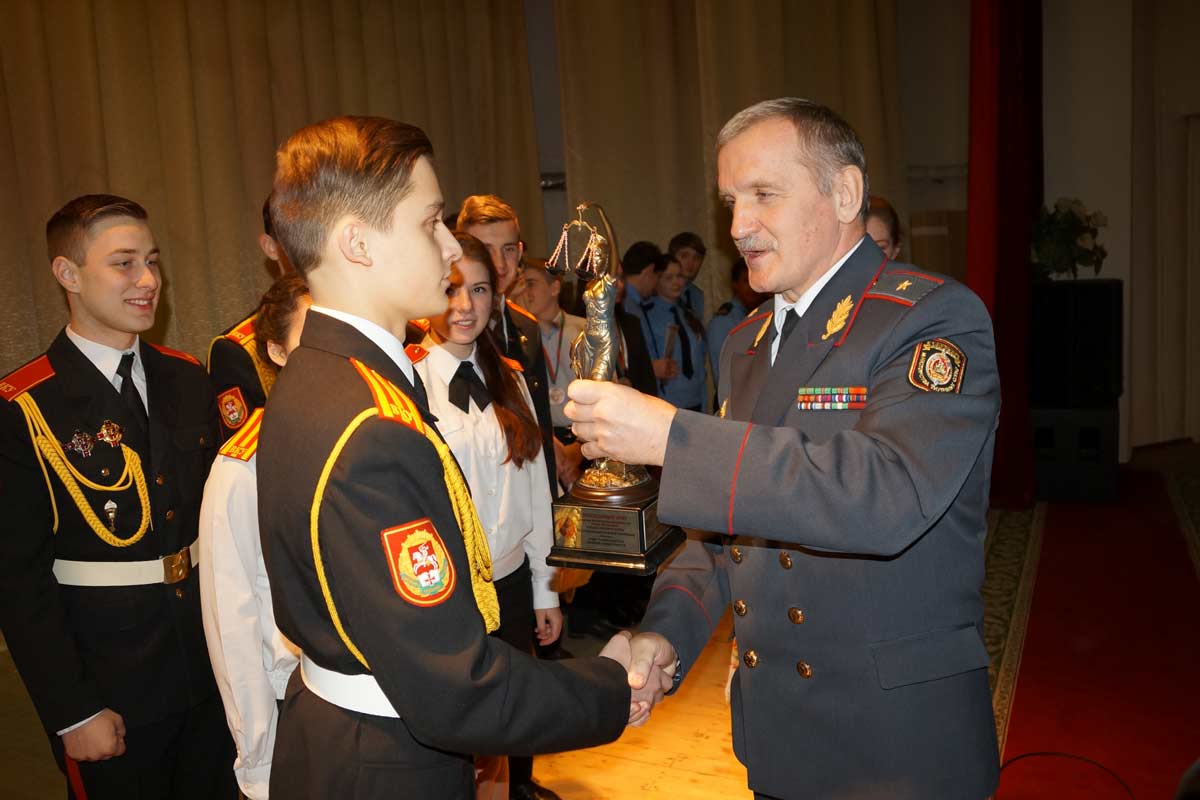 There is a belief: winners do not change. A month ago, on the "Patriot", there was still an oratorical speech by Alexandra Lugovskaya, who spoke emotionally about the tragic fate of the nurses-Belarusians who performed feats during the Great Patriotic War, that not all were held back by tears. The furor produced by Adrian Vysotsky when passing the test on the subjects "History of Belarus" and "Pre-conscription and medical training" is not forgotten yet - the guy received a diploma in the nomination "The best erudite", was awarded the diploma of the Ministry of Education, and also a special prize from the author of the textbook " "A veteran of the Armed Forces colonel in retirement Vyacheslav Varlamov. But on the "Femida" the Vitebsk citizens are still exhibited in a similar and similar competition of other participants who also returned with a shield!

First, Vasily Ryzhankov, who spoke on the topic "Morality and Law in Human Life," enchanted everyone. He is the only one who has risen on the stage with a scroll in his hand. In his story, the feat of the pilot of the Great Patriotic War, the fearless actions of the employee of the Railway (Vitebsk) department of the Department of guarding the ensign of militia Sergey Batalko, who closed the pupil himself, prevented the attack on the child, and the training of officers in the Academy of the Ministry of Internal Affairs.

And Vyacheslav Bachinsky flashed at the answer to questions of the test on the subject "Social Science" - scored the highest score: 12 out of 15 possible.

Adrian Vysotsky's speech in an oral poll on the films about the Great Patriotic War and the militia was briefly described by one of the jury members: participants with such training need to ask not only the name of the film and the circumstances under which the phrase was taken out of context, but at what minute it was happened. In the asset of the guy, the greatest 8.5 out of 10 possible points. And this despite the fact that the jury did not forgive him a few reservations. Otherwise, the result could be maximal!

Vitebsk cadets retreated to the second place only in the competition "Homework", losing only 0.2 points to colleagues from the Minsk region. And most likely, not because their dramatization of the fable was less successful. Some of the people sitting in the hall, their acting skills, as well as staging the number rated the fourth course of the theatrical high school. But all that these guys did was as if from another world, not quite a format.

The Cadets from Vitebsk outstripped the nearest pursuers by almost four points. They also took away two of the three prizes created by the jury. Nikita Soha is recognized as the best scholar, and Vasily Ryzhankov is an orator.

- The deputy director of the school for educational work Valentina Malakh, who invested a lot in these children, recently finished her pedagogical activity. Our victory is a sign of respect for her, "commented Alexander Grigoriev.

Unfortunately, the current "Femida" is the last performance of this group of the Vitebsk team. All of its participants study in grade 11 and in the summer will become cadets or students. All of them, except Adrian Vysotsky, who dreams about the Airborne Forces, see themselves in the law enforcement system. But in general, three of the members of the winning team - Nikita Soha, Vyacheslav Bachinsky, Vasily Ryzhankov - plan to become cadets of the Academy of the Ministry of Internal Affairs.

The struggle in Femida can be divided into two parts: who will become the second and who will not be the last. The second prize was challenged by the Minsk Regional Cadet School and Mozyr School No. 15: one or the other squad went ahead alternately. A turning point was a competition among fans for the knowledge of the history of the National Assembly, when the representative of Gomel oblast was the only one who could not bring a point to his team. With an oral survey of films about the war and the police, the gap widened. And the "silver" point representatives of the Minsk region put in the "Homework".

Cadets from Slutsk came to the "Femida" for the fourth time. First they became quarter, then - third, and in 2015 - the second. We very much hoped that this enviable forward movement will continue this year. However, nobody is able to fight the Cadets from Vitebsk now. But to leave behind such a strong team, like the Mozyr school number 15, is worth a lot. By the way, it was on Polissya that the third jury established the prize - the best artist was named Nikita Purinok.

By and large, the team from the school in Polotsk, No. 2, received only a contest of captains when their leader Dmitry Voznyak and Nikita Sokha scored the top seven points out of ten possible. This stock was enough to become the fourth. The fifth place is occupied by the specialized lyceum of the Ministry of Internal Affairs. 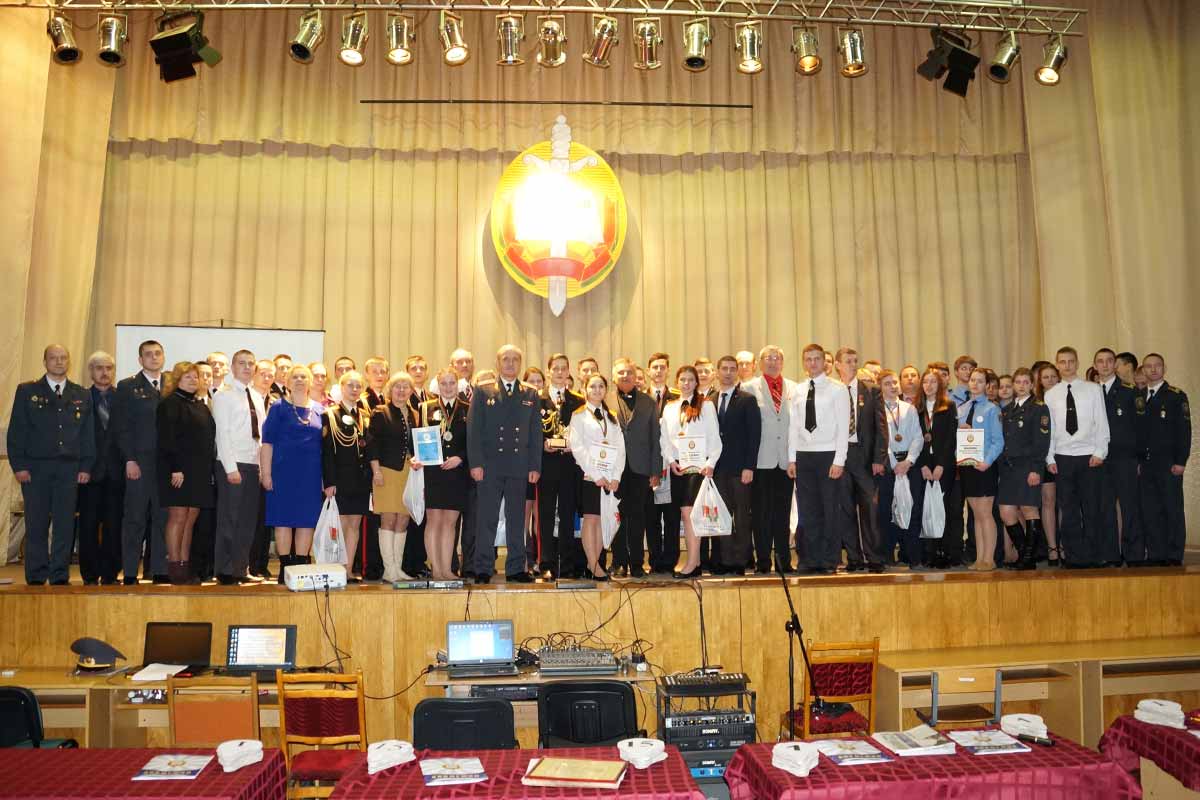 Member of the jury, consultant Department of General Secondary Education, Ministry of Education of Belarus Alla Kazyuchits noted the high level of knowledge of participants "Femida" for specialized educational subject "Social Studies" and awarded diplomas Ministry Catherine Mozheyko (school №15 Mozyr). Certificates of honor of the NGO "Belarusian Peace Foundation" awarded by the speakers who spoke on the theme "We cherish this world bequeathed" Valentin Spetslitseya Berka of Ministry of Internal Affairs and Angelina Churinina (SACCH). Adrian Vysotsky has received a special gift from Colonel member of the jury retired police Valeria Stramburskogo - author of historical essays about the Metropolitan Police, published in two volumes of "Memory" as the best film connoisseur police topics. Deputy Head of the "Joint Editorial MIA" - the chief editor of the magazine "Militia of Belarus" Lieutenant Colonel Sergei Rachila his book "Anti-terror - the territory of law" on the establishment and operation of a unique special unit "Almaz" has awarded Nikita Sohu and Adriana Vysotsky, Dmitry Wozniak, Paul Kuzmich from Mozyr, Paul Karnaukh and Julia Surovets (both from Slutsk). In addition, for these guys, it may be organized an excursion to the "Almaz" SPA.

So, the passing prize of the Academy of the Ministry of Internal Affairs - a statuette of the goddess of justice Femida went to the Vitebsk Cadet School again. For the first time the 11-year history of legal Olympiad "Femida" winners, prize winners were awarded with gold, silver and bronze medals, and participants recognized the best orator, scholar, artist, became the owners of original souvenirs - individual achievements guys symbols.

"You showed the best you can do." But remember, there is no limit to perfection. Therefore, I want to improve further, "the chief of the Academy, Major-General of the Police Vladimir Bachila, summed up the ceremony of awarding the winners of "Femida-2016".

Olga Kulikova,
the newspaper "On Guard".
Photo by Sergey Chebotarev,
Press Office of the Academy