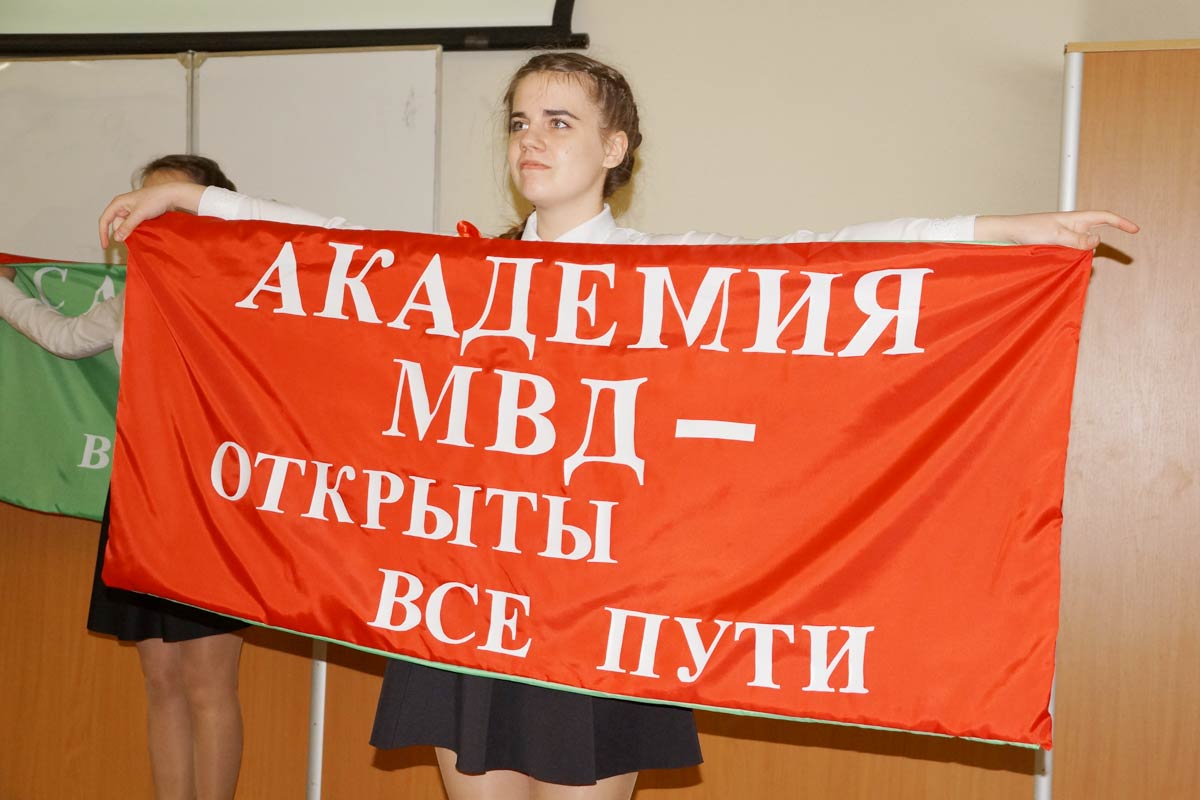 Republican Legal Olympiad "Femida" this year broke all records. 23 teams from all regions of the country fought for the victory.

At the Academy of the Ministry of Internal Affairs on April 14, XII Republican Legal Olympiad "Femida" was held, which brought together 23 teams from general educational institutions where the militia high school has been organizing career guidance for many years. Six teams representing legal classes of schools and lyceums of all regions of the country met on March 10, 17 and 24. On April 7, teams of four cadet schools and the Specialized Lyceum of the Ministry of Internal Affairs participated in a special round. Eight teams - winners of qualifying rounds - met on the site of the youth legal forum timed to the 100th anniversary of the Belarusian militia.

Nomination "According to him, one at a time, sometimes judge the law of the whole country":

The nomination "Let's remember them by their names":

After the traditional draw, the first contest "Femida" began - the presentation of the team. Children from the Vitebsk Cadet School (5 points), the Minsk Regional Cadet School (4.9) and the Mozyr State Regional Lyceum (4.8) started brightly.

In the contest "Warm up the captains" the team leaders answered questions on history, jurisprudence, and geography. Here the best performance was shown by the captain of the team "Pro et contra" (Minsk OKU) Ilya Volokh, who answered 9 questions out of 10 and earned 4.5 points. Only one correct answer was given less by captain "Tirones lex" (Vitebsk KU) Maria-Nika Zhukova. Her team received 4 points. The remaining leaders gave from 1 to 5 correct answers.

In the competition of speakers, the participants made a pre-prepared theme. Vitebsk Mariya-Nika Zhukova flashed again here, receiving the maximum points from almost all judges-5.9 points out of the 6 possible teams. The speaker from the Mozyr State Regional Lyceum "Polesie Rangers" Ivan Piskun, who was only 0.1 behind the leader of the contest, also successfully performed. It is worth noting the good preparation of the participants in this contest - 5 points and above earned all the guys.

In the next competition, the participants were given the opportunity to relax - the fans joined the game, earning extra points to their teams, answering questions about the departmental newspaper "On guard". The team "Tirones lex" (Vitebsk KU) and "Pro et contra" (Minsk OKU) received a score of 1.5 points, 1 point - SOBR (school № 15 in Mozyr), 0.5 points - "Defenders law "(secondary school No. 23 in Grodno).

One of the youngest contests is an oral poll on the knowledge of the content of the best films of the Soviet and Belarusian cinematography about the militia. 10 additional points could earn team members. The best representative was the representative of the Vitebsk Cadet School ..., who scored 9.5 points. The remaining representatives received from 5 to 8.5 points.

Before the last contest, the results of testing on social science, which is traditionally held at the beginning of the Legal Olympiad, were summed up. Members of the jury noted that a quarter of all the points of "Femida", 15 out of 60 possible, scholars earn it in it. The teams coped well with the tasks. The team of secondary school No. 15 in Mozyr, Mozyr State Regional Lyceum and the Minsk Regional Cadet School received 12.5 points. At 0.5 points less earned school № 3 in Starie Dorogi and Vitebsk Cadet School.

The most spectacular competition od the "Femida" - "Homework." The guys are preparing a dramatization of one of the famous literary works about the activities of the militia, using various props. Mozyr State Regional Lyceum and Vitebsk Cadet School again vividly made a product of the militia detective novel of the Weiner brothers "Era of Mercy" - 14.9 points out of 15 possible.

According to the results of all competitions, the team "Tirones lex" of the Vitebsk Cadet School scored 52.8 points in the 12th Republican Legal Olympics "Femida". The second place belongs to the team "Polesie Rangers" of the Mozyr State Regional Lyceum (49 points), the third became the "Pro et contra" of the Minsk regional cadet school (48 points). The winners of the Legal Olympiad, as well as the leaders of the competitions were awarded diplomas and valuable gifts.

Major-general of militia Vladimir Bachila handed the coach of the team of Vitebsk cadets to Alexander Grigoriev a transitional figurine of Femida. And the director of personnel of the group of companies "Alutech", who, like Valery Strambursky, is the author of the draft of the Legal Olympiad, Andrei Melikhov made a mini statue for his own money, and handed it to the Vitebsk Cadet School for permanent storage for three wins.