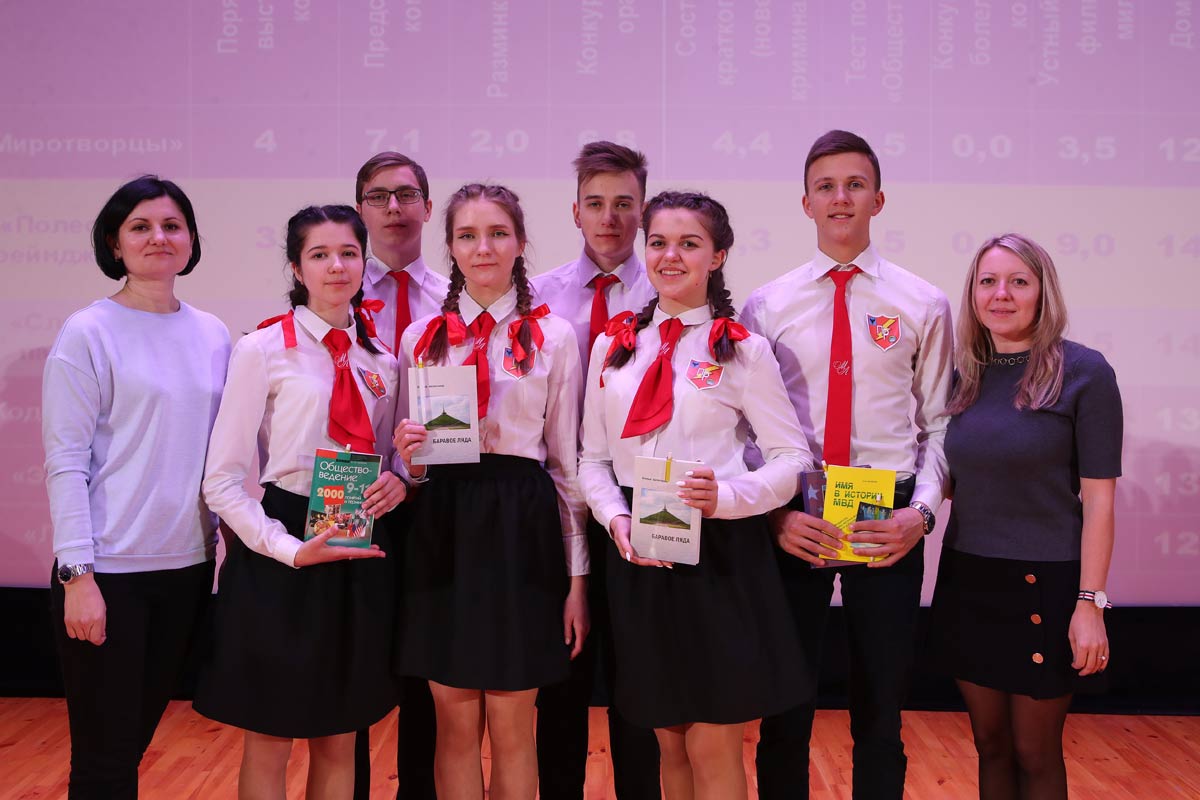 The departmental newspaper told about the second qualifying round of the republican legal Olympiad “Themis” among students of specialized classes.

The second round of the XIV Republican Legal Olympiad "Themis-2019" was held at the Academy of the Ministry of Internal Affairs. Students of legal classes from Zhlobin School No. 2 (“Peacekeepers”), Mozyr — No. 15 (“Glorious Pantheon”), Grodno — No. 13 (“Code of Honor”), Lida - No. 10 (Equitas) , Dyatlovskaya - № 13 ("Leader") and the Mozyr State Regional Lyceum ("Polessie Rangers").

Best of all with the first competitive task - the presentation of the teams "Here we are what!" - coped "Polesye Rangers". Just 0.1 point behind the "Glorious Pantheon".

- The participants showed an excellent level of preparation, ”commented Valentina Mayevskaya, deputy head of the department for coordinating the methodological work of the Minsk City Institute for Educational Development. - My colleagues and I immediately noted that today more powerful guys have gathered here than in the last semi-final. They revealed the name of their team using drama, poems and songs.

"Warm-up captains" turned out to be tense. The jury even drew the attention of the contestants to the need to learn to overcome the excitement on the stage, as well as expand their horizons.

In the competition of oratorical skills of experts and spectators, the performance of Vyacheslav Minoitya (Mozyr State Regional Lyceum) with the monologue “My home is the Republic of Belarus”, particularly relevant in the light of the Year of Small Country held in the country, struck. Anatoly Pautov (Secondary School No. 15 of Mozyr) is the only one of all the participants of the first and the current qualifying stages of the Olympiad, who reasoned on the topic “The severity of the law speaks of his philanthropy”.

- Do not forget that we do not evaluate the degree of text memorization, ”said retired police colonel Pavel Gorbaruk, former head of the department of psychology and pedagogy of the Academy of the Ministry of Internal Affairs. - The speaker is not only an artist, it is also a fighter with bright ideas and deep thoughts. Your task is to create polemics and get support from the audience. Not many have seen this position.

To win the next stage, the guys had to carefully watch the films “Petrovka, 38”, “Ogaryova, 6”, “The street is full of surprises”, “In broad daylight”, “Traffic police inspector”. Best of all with the task - to learn from the quotes to the film and its heroes - managed Vyacheslav Minoit.

The competition of fans is always a real chance for teams to get ahead or improve their position in the standings. The most erudite fan Yevgeny Klimets (Secondary School No. 13 of Grodno), who earned his team a score of 4 points, did not miss such an opportunity.

At the end of the Olympiad day, the experts checked their homework. Participants acted with theatrical interpretation of famous fables. The event organizers proposed works by I. A. Krylov and S. V. Mikhalkov. Among the honors were "Polesie Rangers" with the fable "Pike". By the way, team members Daria Kapchuk and Svetlana Kubrak were awarded as the best actresses. The second result in the competition - the squad "Glorious Pantheon".

According to the results of all competitive tasks, the highest number of points (62) was gained by the Polesye Rangers team. Also, the Glorious Pantheon (58.7 points) reached the final. Both teams are amazing! If they meet on the same competition ground, they act on equal terms. Last year, in the final of the “Themis” Olympiad, the Lyceum and the school (it was then represented by the “MUR” team) took second and third places, respectively.

Elizaveta Baranova, the newspaper “On Guard”.
Photo by Vyacheslav Tsuranov