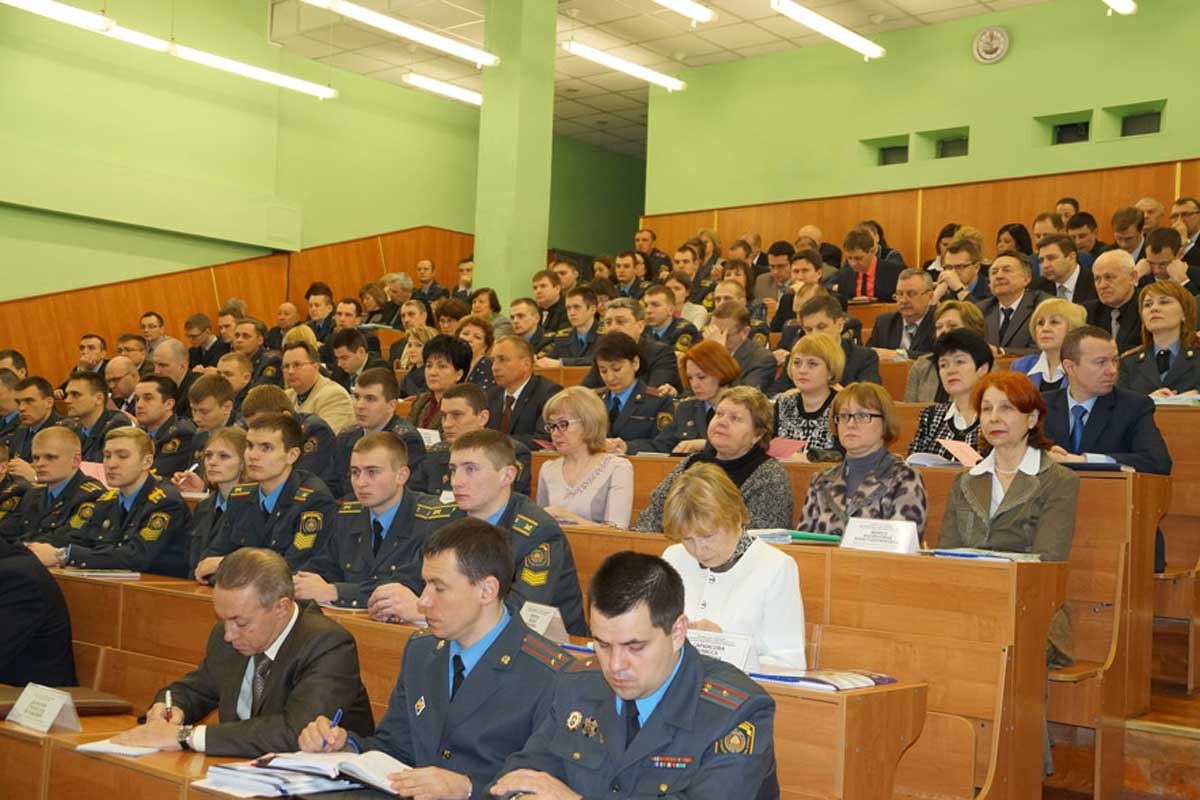 The international conference ''Problems of Combating Crime and Training Personnel for Law Enforcement Agencies'' was held on April 3.

Representatives of more than 70 organizations from 28 departments took part in the plenary session and sections of the international scientific and practical conference: the management and staff of the Ministry of Internal Affairs, the Prosecutor General's Office, the Investigative Committee, the State Security Committee, the Constitutional Court, the State Forensic Committee, the National Center for Legislation and legal research, the Republican Collegium of Advocates, the Federal Service for the Execution of Punishments of Russia, as well as leading teachers and scientists and universities and research organizations from Belarus, Russia, Ukraine, Kazakhstan and Tajikistan. Among the participants of the conference are 22 doctors and 187 candidates of science.

In the framework of the plenary session, several participants of the conference made scientific reports. Doctor of Juridical Sciences, Professor Boris Gavrilov, head of the Department for the Management of Crime Investigation Authorities of the Academy of the Ministry of Internal Affairs of Russia, talked about topical issues of modern pre-trial production in Russia. Director of the Scientific and Practical Center for Strengthening the Rule of Law and Order of the Prosecutor General's Office of the Republic of Belarus, Doctor of Law, Professor Vladimir Khomich, informed the audience about the principle of professional scientific knowledge in training law enforcement personnel. Chairman of the Republican Bar Association Viktor Chaychits has prepared a report on the role of mediation in combating crime. In turn, the head of the criminal law department of Volgograd State University, Doctor of Law, Professor Lyubov Lobanova, spoke about the content of the qualifying signs of violent sexual crimes in the interpretation of the Plenum of the Supreme Court of the Russian Federation: several critical remarks.

After the plenary session, the participants of the event continued their work in various sections, where they discussed administrative, legal and criminal procedural aspects of the activities of law enforcement agencies, criminal law, criminological and forensic problems of combating crime, topical issues of the functioning of the penal system, constitutional, civil and other institutions of law.

- Considering the problems of combating crime, we see that it does not stand still, but is improving. This requires law enforcement to develop adequate measures. The enormous scientific potential of educational institutions and research institutions, as well as the experience and knowledge of practical employees, including representatives of state bodies, whose delegations participate in the current conference, will provide a fresh insight into the problems of maintaining the rule of law and welfare of citizens in each state, as well as on the problems of training highly qualified specialists for law enforcement agencies. The experience of the past years has shown that such communication is an effective mechanism for multilateral cooperation and constructive partnership," said the chief of the Academy of the Ministry of the Interior, candidate of law, associate professor major general of militia Vladimir Bachila, communicating with journalists.

Gavrilov shared his impressions with one of the Russian guests:

- The Academy of the Ministry of Internal Affairs visited not for the first time, and the impressions, as always, are the most positive. Issues that are raised at the conference in relation not only to fighting crime, but also training cadets, students in the legal fields of activity, are of the utmost importance. In his previous visit and now he drew attention to the high level of organization of the educational process. I think that in the first place it is the merit of the head of the Academy.

The success of the fight against crime largely depends on the level of interstate coordination of the activities of law enforcement agencies, professionalism and qualifications of employees. For 18 years (since 1997) the annual holding of this scientific forum has become a visiting card of the Academy of the Ministry of Internal Affairs of the Republic of Belarus and a good tradition that allows not only to discuss pressing issues of combating crime but also to improve the training of law enforcement personnel.

Sergey Chebotarev,
Press Office of the Academy.
Photo by the author