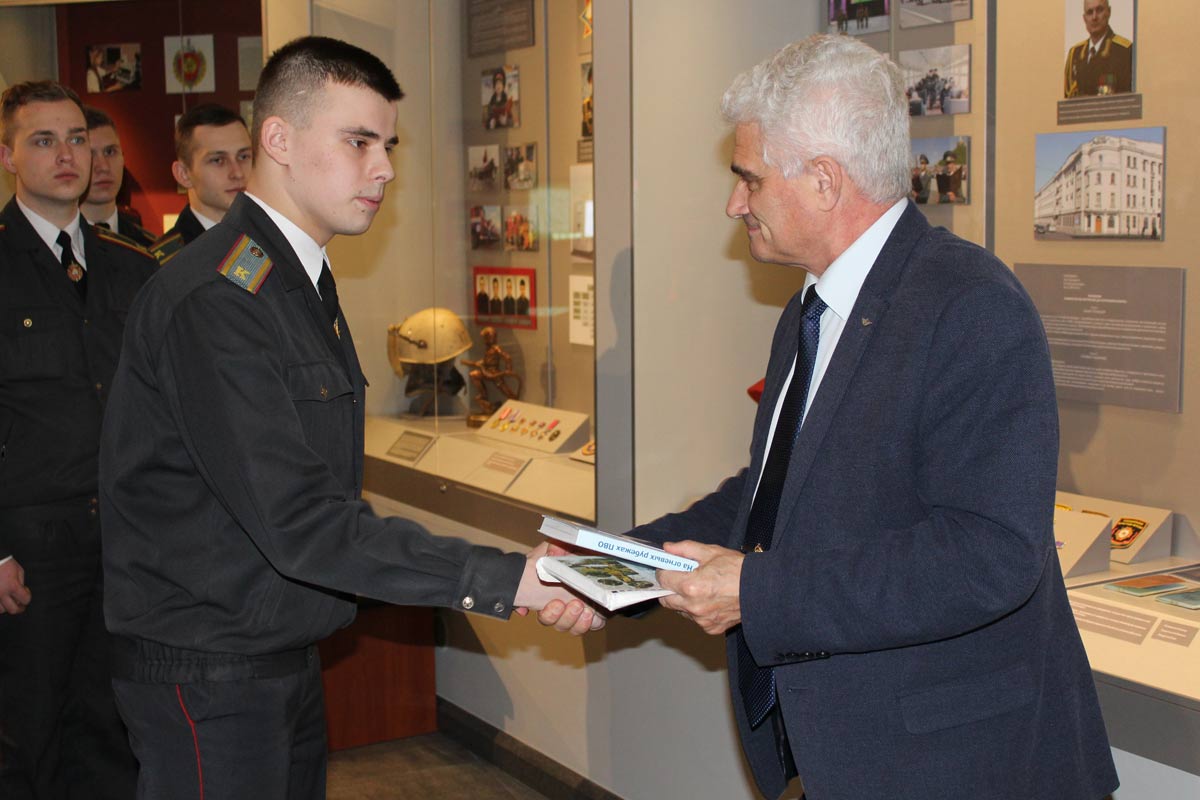 About a year ago, in the city of Akhtubinsk of the Astrakhan Region, a book was presented dedicated to Soviet anti-aircraft gunners who defended the air lines.

The author of the book “At the Air Defense Firing Lines” is Russian local history writer Leonid Getmantsev. In his creative work, he summarized his research on the events of the Great Patriotic War that unfolded in 1942 on the approaches to Stalingrad (present-day Volgograd).

The book tells about the front-line life of Soviet anti-aircraft gunners, who served as part of the 72nd separate anti-aircraft armored train and gave their lives defending the sky above the Akhtuba land. The dead heroes are buried in one of the city’s mass graves.

In the Belarusian capital in the Museum of the History of the Great Patriotic War, cadets of the Academy of the Ministry of the internal affairs met with the publication. The excursion and meeting with the deputy director of the museum, colonel of the reserve Yury Tsykal was devoted to the 75th anniversary of the liberation of Belarus. The event was attended by representatives of the 3 "B" course of the faculty of militia. And it is no coincidence.

After visiting the hall of the heirs of the Great Victory, Yury Tsykal told the children about the literary work of a researcher from Akhtubinsk and an important occasion for this meeting:

- Among the heroes of the book - Alexey Averkin, whose fate the author imbued with the most deeply. Studying his biography, the writer found out that the great-grandson of the hero, Stanislav Seryi, lives in Belarus and studies at the Academy of the Ministry of internal affairs. The book is sent to our museum with a request to transfer it to the great-grandson of the hero.

According to Stanislav, a year ago, his grandmother was tracked down by Leonid Getmantsev. The writer told her about his book and the feat of defenders of the station Akhtuba.

“It is very pleasant to participate in today's event,” the cadet shared his impressions. - It was from the author of the book that my family learned the details of the death of my great-grandfather. This is a priceless memory of the events of the Great Patriotic War, which also affected our family. I am proud of the great-grandfather's feat.

The transfer of the book was solemn and symbolic. So the publication, which reflected on its pages the fates of the defenders of the Fatherland, had its own history and place of honor among the family relics.