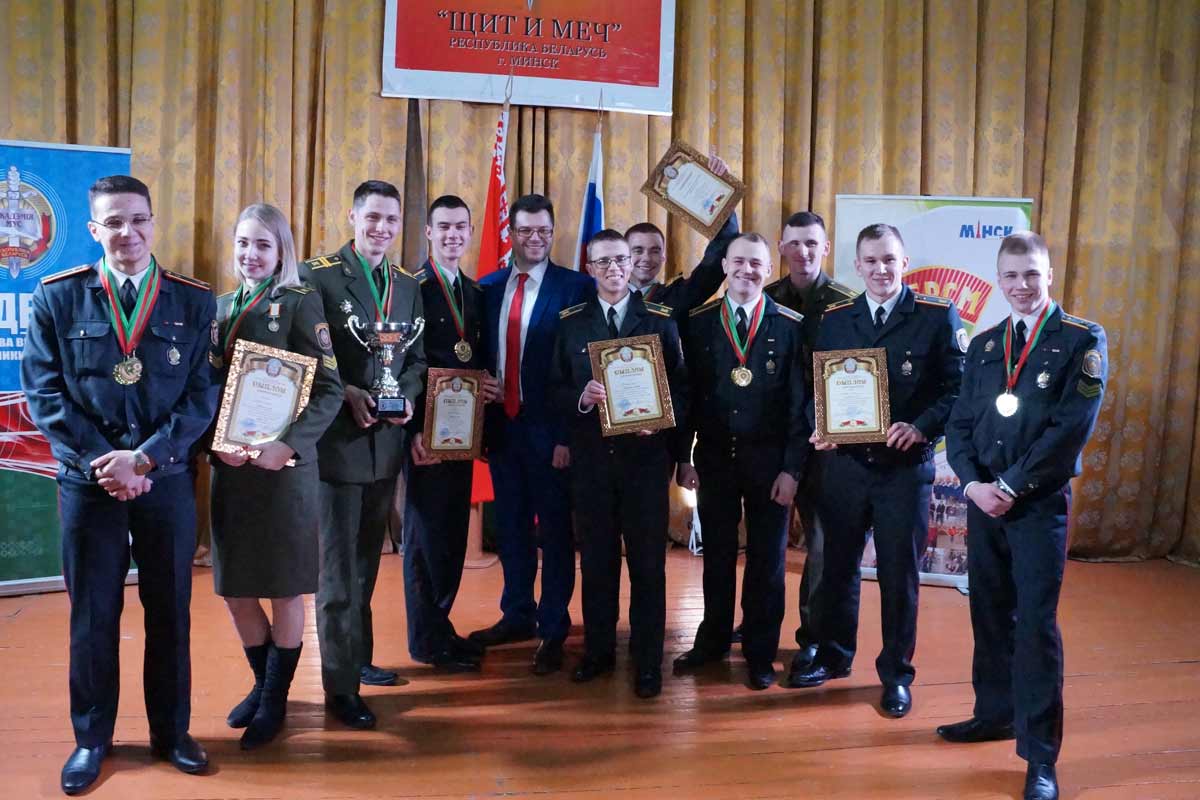 The real battle of minds was observed last weekend at the Academy of the Ministry of Internal Affairs. International tournament "Shield and Sword" gathered teams from Belarus and Russia.

The main militia university of the country on November 24-25 accepted experts from different parts of the two countries. For fourteen years, the tournament has become so fond of its participants that everyone is looking forward to November to gather in a militia alma mater for intellectual fights. "Shield and Sword" is gaining momentum every year. Judge for yourself: the teams are already 39 instead of 36, and more applications have been submitted. However, the selection of participating teams is strict. The rules of the tournament regulate the age of the players (date of birth - 01/09/1995 and later), as well as the composition of the teams (not more than six participants in each).

The opening ceremony of the 14th Shield and Sword International Intellectual Games Tournament took place on Saturday on the main stage of the Academy. The head of the Academy of the Ministry of Internal Affairs of the Republic of Belarus, Candidate of Juridical Science, Associate Professor,Major-General of the militia Vladimir Bachila and Director of the Republican Public Association “Belarusian League of Intellectual Teams”, one of the organizers of the tournament Sergey Buyan addressed the participants with a welcoming speech.

Traditionally announced teams were presented at the tournament, and the captains went up to the stage to greet.

It has already become a tradition to open the tournament with an intellectual battle, which this time with pleasure was made by co-organizer of the event, Vasily Yadchenko. The extraordinary game "Media Alphabet" a good cheer for the audience.

After the draw, all participants had to show their knowledge in the scoring game "Erudite Quartet". Four representatives from each team fought there. Connoisseurs answered the questions, united by a common topic, of different levels of complexity. Four best teams of the tournament came together in the final.

Brainstorming continued on the second day. The youth forum on Sunday took the Faculty of Investigators, where, in fact, the tournament originated. By ten in the morning everything was ready for the game “What? Where? When?". The game was led by Sergey Buyan. The participating teams were given a minute to discuss each task and prepare an answer. A total of 60 questions were proposed, which were divided into four blocks. The participants were laid out in full, because not only cups, prizes and medals are at stake, but also a ticket to the Belarusian championship in intellectual games among student teams.

And here is the closing ceremony, at which the results of the tournament were announced. The awards were given by the Head of the Academy. The team "Caspian Friends" (future officers of the medical service from the Belarusian State Medical University) ranked third among the security universities in the game "Media Alphabet", "Sysknoy Ekaterinodar" (Krasnodar University of the Ministry of Internal Affairs of Russia) - second place, and our team "Smart things" Ranked first. The winner of the game "Media Alphabet" was the student team "Shadow of the Father Simba".

In the intellectual contests of the Erudite Quartet, the Incompetence and Indifference team came forward. In second place - “John Holmes”, in third place - “Estonian express”.

Among the power universities in this game, the “Smart Things” team turned out to be the most erudite. The second result was shown by the team "Caspian Friends", beating the team "Union of Pskov cadets".

Among student teams in the game “What? Where? When?” The best result for the team “ hadow of Father Simba”. "The Incompetence and Indifference" team is in the second place, and the "Estonian Express" is in the third place. The winners of the game among cadets were the squads “Smart Things” (first place), “Caspian Druz” (second place) and “Lumos Maksima” from the Nizhny Novgorod Academy of the Ministry of Internal Affairs of Russia (third place).

And the most exciting moment of the awards ceremony - the presentation of cups. Among security universities, the Smart Things team gets the cup of the XIV International "Shield and Sword" intellectual game tournament of the Academy of the Ministry of Internal Affairs of the Republic of Belarus. This is the third cup in a row. Well done guys, keep it up!

The absolute winner of the tournament, the owner of the main cup was the capital team "Incompetence and Indifference".

Vladimir Bachila thanked everyone for the excellent game and invited exactly one year into the main militia university for the fifteenth youth forum, which has long become our calling card.

Recall that the tournament was recognized by the Belarusian League of Intellectual Teams as the best student tournament of the country for 20 years. A team representative "Union of Pskov cadets" of the Russian Federation - Associate Professor of Public Law Disciplines Pskov branch of Academy Federal Penitentiary Service of Russia, Candidate of Historical Sciences, colonel of internal service Roman Ivanyakov at the closing ceremony said that thanks to the Academy of the Interior Ministry and its project "Shield and Sword" their university has appeared its international tournament on intellectual games "Golden Star".

The leading militia university thanks all the participants and organizers for the excellent game, and the press for the continued attention to the international tournament.