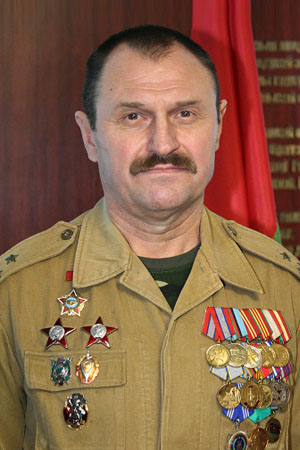 From March to September 1982, as part of the special task unit of the Ministry of the Interior of the USSR, "Cobalt-3" was in the Democratic Republic of Afghanistan as deputy commander of the team for political and educational work. Repeatedly participated in military operations. June 28 and July 20, 1982 tactfully organized the defense of the place of deployment of the team and provided a skilful management of the actions of personnel to repel attacks by bandits at night. For courage and determination shown in the fighting situation in 1983, he was awarded the Order of the Red Star. In June 1985, he was sent back to Afghanistan for two years, where as an operational officer and senior operations officer of the Ministry of the Interior of the USSR at the Ministry of Internal Affairs, the DRA executes tasks to provide international assistance and takes part in hostilities. So, in November 1986, while traveling from Kandahar province to Zabol province by helicopter MI-8 provided fire cover and rescue crew members shot down helicopter MI-6. In 1987, he was awarded the second Order of the Red Star and the Afghan Order "Glory" for the courage, endurance and resourcefulness shown in the fight against the rebels.
Exemplary performance of official duties is marked with medals "For impeccable service" 3 and 2 degrees, a breastplate "For excellent service in the Ministry of Internal Affairs", jubilee medals. In 2003, V. Duk entered the book of honor of the Academy of the Ministry of Internal Affairs of the Republic of Belarus.